SKIING VS SNOWBOARDING: WHAT CHOICE DO WE HAVE?

by Oxygene on February 16, 2015 in Ski holiday tips, Snowboard

To ski or to snowboard? 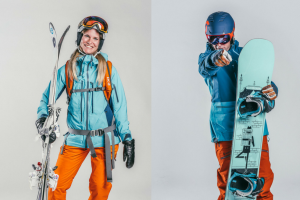 You probably won’t have time to go skiing and snowboarding during your week on the slopes, so skiing vs snowboarding: here is our quick comparison of both sports to help you make your mind up.

At the beginning, there was skiing

Skiing has the history behind it, 6000BC is the earliest mention we can find, whereas snowboarding is still in its extreme youth having originated in the 1960’s.

Similarly skiing has been an Olympic Sport since 1936 with snowboarding only getting in on the act in 1998. For a long time snowboarding was the fashionable option being seen as much more youthful and cool. All teenagers wanted to be boarders, but now those teenagers are grown-ups, boarding is no longer the rebellion it once was.

Skiing is becoming more popular again with the gear looking much cooler and free-skiing becoming more extreme and entertaining. Now skiing appeals to the rebellious youth.

We’re sure the trend will continue to switch between the two and should have no bearing on your decision but it’s always nice to start with some history.

All the gear, no idea 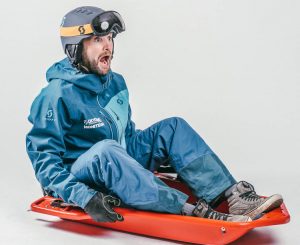 Snowboarders definitely get the better end of the deal when it comes to equipment: their boots, like oversized trainers, are super comfortable and they can carry their one piece of kit in just one hand!
Compare this to ski boots, which make you look and walk like a robot and that’s without mentioning the two skis and poles skiers have to carry around (whilst trying to not hit anyone else in the head). So, skiing or snowboarding? Snowboarders definitely win this battle.

Also, if you’re looking to set yourself up with your own gear, it’s substantially cheaper to buy your own snowboarding boots and board than ski boots, skis and poles. That’s not to say you can’t do both on a budget but if you compare, equal quality gear snowboarding will always be cheaper.

Beginner boarders will spend several days to a week repeatedly falling on their backside, knees and face simply trying to stand up, let alone control the board, until they gain their balance and learn to link turns, then they’re away progressing fast. Beginner skiers can click into a pair of skis and successfully snowplough down a green run on their first attempt.
It’s when they start trying to parallel turn and ski with any kind of style or grace that things get tricky.

It is fair to say that skiing does win in the lift stakes; chair lifts and drag lifts were designed with skiers in mind and aren’t the simplest or most graceful mode of transport for boarders to negotiate.

Snowboarders don’t fear steep runs, once they can do the ‘falling leaf’ (balance on the board and slide on one edge from one side of the piste to the other) they can easily get down any steep run without having to turn, whereas skiers on a steep run have no choice but to put in turns to make progress and so must be much more competent to tackle the same gradient.

Conversely, skiers can, from day one, coast over flat runs just using their poles if necessary. Flat runs hold the biggest challenge for a beginner boarder. To successfully negotiate a flat they must pick up enough speed on the steep part to carry them over the whole flat section where they must simultaneously dodge other boarders and skiers without slowing down and remain in control of the board and not catch an edge. If they don’t succeed they will find themselves stuck on a flat with no poles to help themselves and will end up unstrapping from their snowboard and walking across the flat.

Some resorts have more flat bits than others, something to bear in mind when you’re choosing a resort for your snowboarding trip. In a resort with several flat areas you will either get to grips with flat bits quickly or learn to choose your runs wisely! 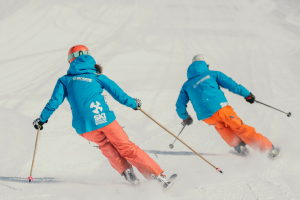 If you are all about the speed and simply want to go as fast as possible down the mountain then skiing is the one for you.

It’s an (unbiased) fact that skiing is a faster discipline than snowboarding, that’s not to say you can’t get up some serious speed on a board, but put a boarder and skier of equal ability in a race and the skier will win every time, sorry boarders but it’s science.

Variety is the spice of life

Skiing might have the edge when it comes to versatility. Skiers have more options: Nordic skiing, cross-country and telemark. You can look into split boards which allow boarders to hike up mountains with the skiers but they in a price bracket of their own and are therefore really only for the serious off-piste snowboarder. 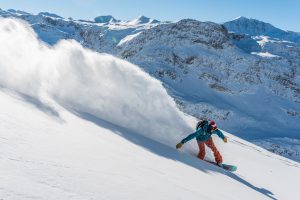 Snowboarding in powder is an incredible experience completely different from piste riding. The board floats on the snow and you can make huge smooth turns giving you a completely weightless sensation. People compare boarding in powder to surfing and in fact that is what the original snowboard creator had in mind, he named his creation the ‘snurfer’ and said it allowed people to surf the snow.

When it all goes wrong

Sadly skiing and snowboarding, being extreme sports, can result in injuries and they happen differently to boarders and skiers. Boarders are substantially more likely to sustain a wrist or coccyx injury whereas skiers tend to injure knees and legs. To ensure that your safety is no accident, here’s our top tips on how to avoid ski injuries this season.

Whichever you choose we strongly advise you book yourself some lessons to make sure you’re learning the right technique from day one. Also, instructors know all the best runs!

You will hear jokes and banter between skiers and snowboarders on the mountain as each tries to prove their sport is the best, but as long as you’re on the mountain and you’re smiling then you’re doing it right.

I want to start skiing
I want to snowboard
ShareTweet
X
We use cookies to give you the best browsing experience.Accept cookiesRefuse cookiesRead more