THE BEST OF SAVOIE CHEESE

Yes, that’s right, a whole day dedicated to our favourite pastime and one of the great pillars of French civilisation: cheese.

As skiers and snowboarders living in the French Alps, cheese is an indulgent delicacy nudged close to our hearts. To celebrate this wonderful day, we’ve dipped our fondue forks into the pot of all-things-Savoie and are serving up the ultimate guide to the best of french cheese.

So, from Fondue, Raclette, Reblochon and Tartiflette to Emmental de Savoie, Beaufort and good old Tomme, we’ll explore how it’s made, where it comes from as well as the best ways to eat yours.

Those who regularly frequent the French Alps will have seen first hand, or at least know all-too-well about the country’s sordid love affair with fromage. Enter any resort in the Savoie region and you’ll be greeted by whole restaurants, countless specialist events and themed evenings that centre around – and are completely dedicated to – cheese.

This isn’t a new relationship, either. For the Savoie region in particular, its unfaltering love for dairy proves that they’re in it for the long haul, with records of the first cheese ‘locavore’ (local food movement) dating back to the 13th century.

Now, let’s journey back to a time when the French ski resorts we know and love today were instead famed-most for their hamlets, farmlands and blossoming livestock. When, through the use of traditional farming equipment and ancestral-led methods and techniques, farmers and dairy maids from across the region started to create the recipes for incredible creamy cheese that would delight for centuries. Within this very setting, we see the birth of our beloved Savoie cheeseboard favourites… 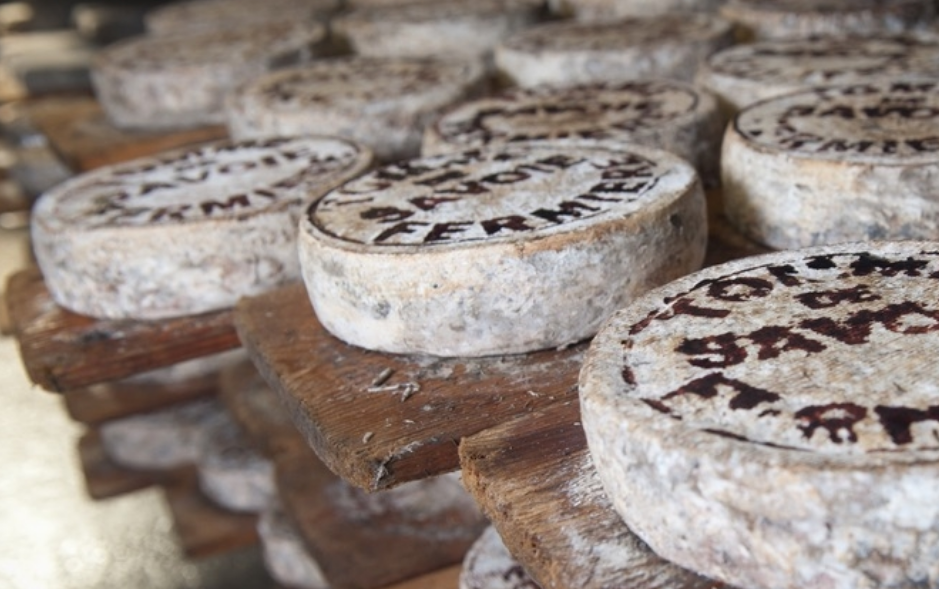 Tomme de Savoie, left to mature for several months in a traditional cellar.

Associated with the gruyère family, Beaufort is a firm, raw Alpine cow’s milk cheese. Sitting equally as well on a cheeseboard or in a fondue, it is produced in Beaufort in the Savoie and produced from local Tarine (Tarentaise) cattle milk.

Prepared using a ratio of 11 litres of milk to every 1kg, Beaufort is made through a process of heating, pressing and cooling before soaking in brine and resting for up to 2 months. During the storage period, the cheese is salted each morning, then flipped and massaged in the afternoons. Once mature, the cheese is smear-ripened for a strong flavour and pale yellow rind. The cheese is then left to age in a cool mountain cellar (or cave) for a minimum of 6 to 12 months.

Abondance cows, well-known for their milk used for Reblochon and Tomme de Savoie

This big boy cheese weighs over 70kgs a wheel and falls into the medium-hard Swiss cheese category, despite its popularity in the Savoie. Yellow in colour with a mild taste, it’s thick and creamy texture melts like a dream, so it’s a great variant for fondue too.

Produced at 500 metres and above, Reblochon was the first cheese in the Savoie region to receive it’s AOC accreditation back in 1958. A soft cheese with a smear-ripened and washed rind, it’s believed to have been created ‘almost by accident’ in the 13th century.

Deriving from the Savoyard term ‘reblocher’ or ‘reblasse’ (which when literally translated means ‘to pinch a cow’s udder again’), Reblochon is actually made from the milk from the second milking. Back then, when landowners ruled the mountain, they insisted that the farmers’ milk belonged to the land and therefore to them. To ensure that they had enough milk for themselves and their landlords, the herdsmen would first milk for the landowners, then again later in the evening for themselves.

Turns out, the farmers came up trumps as the milk from the second milking is richer in cream, therefore higher in quality and ultimately responsible for this beautifully well-rounded and nutty cheese.

Available all year round, this beige beauty is coated in a thick, brown/grey rind and dates back to ancient history.

Like most Tommes, Savoie’s version is made from the left-over skim from the cream (which is typically used in butter and richer cheeses). As a result, this a mild, semi-firm cow’s milk cheese has a comparatively low fat content, ranging between 20 and 45%.

After pressing, it is left to mature for several months in a traditional cellar, which helps produce the strong smokey flavour and characteristically thick rind.

Both a type of cheese and meal in itself, this infamous dish follows a recipe derived from its farming roots almost 700 years ago, whereby a large block of cheese was melted over a fire and served with potatoes. Pliable, creamy, and balanced when melted, there’s no wonder Raclette is considered the perfect cheese to plop on those potatoes.

WHERE: Served-up originally in the Swiss Alps, Raclette was first made in Valais (the home of the Matterhorn), a mountain range that sits in the South West of Switzerland. Within the centuries that followed, this treasured cheese grew rapidly in popularity, quickly joining us in the French Alps before finally venturing to the farms, restaurants and dinner tables in parts of Austria, Germany, Finland and even the United States.

WHY: Now an alpine classic, Raclette cheese is named after the French word ‘racler’, which literally means ‘to scrape’ and plays reference to the fact that the melted cheese must be scraped straight from the wheel onto the plate. A beautifully balanced cheese, it has the perfect amount of fat to produce a creamy melt.

HOW: Traditionally, a demi-wheel of Raclette is melted (with the big piece of cheese facing the heat) in front of an open fire, however, modern methods involve electric table-top grills with coupelles (small pans) that hold the scraped cheese. Once a layer of cheese has melted, it is scraped onto a plate and accompanied by: 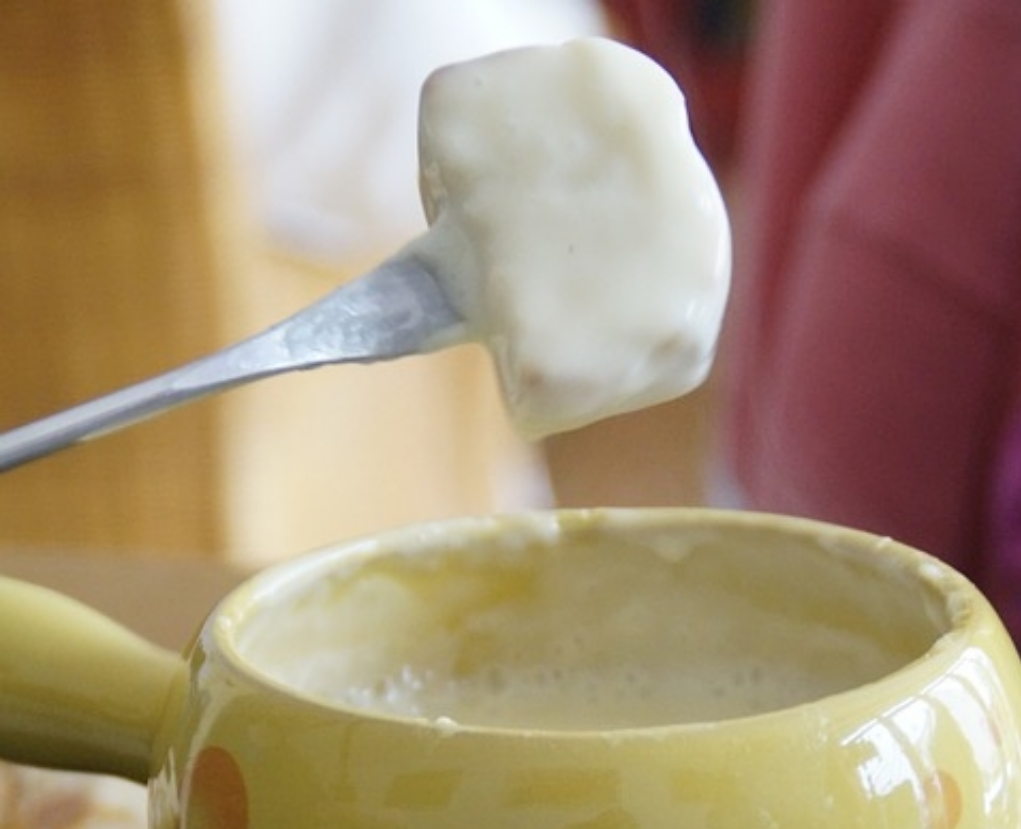 Fondue in its caquelon fondue pot.

Found on near-to-every menu in the Savoie, this now-world-famous dish has outgrown its previously humble alpine roots to sit ‘loud and proud’ in the food hall of fame.

WHERE: Despite it’s French history and allegiance, the first references to cheese fondue cooked with wine actually dates back to 1699, from a Zurich publication called ‘Käss mit Wein zu kochen’ (‘to cook cheese with wine’). In an attempt to encourage cheese consumption (and perhaps to claim fondue as theirs only), fondue was actually promoted as a Swiss national dish by the Swiss Cheese Union (Schweizerische Käseunion) in the 1930s, before heading over the lake to gain its North American following in the 1960s.

WHY: Often made in the winter months to use up old bread and cheese when fresh produce is harder to come by, ‘fondue’ originally derived from the french word ‘to melt’. It’s highly-calorific nature and incredible taste makes it a favourite food for skiers; complementing cosy evenings in the chalet or offering the perfect excuse for a quality meal out with friends.

HOW: Most traditional fondue recipes use a blend of our Savoie faves – Beaufort, Emmental and Comté as well as white wine, garlic, cornstarch and a good pinch of salt. Stirring continuously, the cheese mixture is heated, melted and served in a communal pot (known as either a caquelon or fondue pot) over a stove (réchaud) using a candle or fuel-based lamp. Cubes of bread, charcuterie and cornichons are then skewered onto long-stemmed forks and dipped into the fondue pot.

A traditional Savoie dish that incorporates Reblochon cheese, potatoes and lardons. Rich in both calories and character, Tartiflette is quite simply the best of French comfort food. Well, when it comes to cheesy potatoes with bacon, what’s not to love?

WHY: Derived from the word ‘tartifles’ – which relates to a sliced potato dish from France’s Provence region – Tartiflette gained popularity in French ski resorts during the 1980s after the Union Interprofessional Reblochon created a marketing campaign to counteract dwindling Reblochon cheese sales.

HOW: Made using Savoie Reblochon, which is melted over potatoes and lardons and mixed with onion (we are in France after all), it’s recipe is actually the youngest of all the cheese dishes. We love Reblochon de Savoie’s recipe. Go on, try it at home.

ShareTweet
X
We use cookies to give you the best browsing experience.Accept cookiesRefuse cookiesRead more