by Alison on January 31, 2017 in Après-ski, Snowboard, Useful information

Every bubble has it’s own lingo and ski resorts are no exception. We don’t call Meribel the ‘meribubble’ for nothing. If you’ve ever visited friends on a winter season and feel like they’re speaking Chinese, this guide is for you. Have a quick read, learn the jargon and get ski savvy before you hit the slopes this winter. 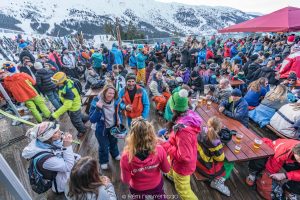 Or “after” (literal French translation), it is – in a nutshell – everything included in our bizarre post-ski antics. A quiet drink nursing those bruises from the park, admiring the view from the terrace and dancing on tables in your ski gear all count. Méribel is après-central and was recently voted third-best ski resort by the The Telegraph Ski & Snowboard with countless après-ski bands livening up your evenings. Bars with live music to check out include: the Ronnie, Jack’s, LDV and Meribar… and trust me, I’m only getting started…
Example: Q: “Where are you going for après today?” A: “Ronnie for the usual jug of peche” OR “LDV for Bring Your Sisters” etc. 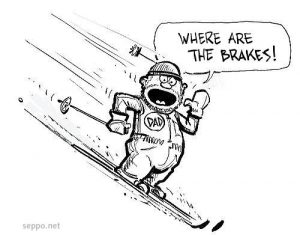 Basically eating dirt (or snow in this case) off a feature or while attempting some steezy trick (see description for steezy below).

Typically relates to the climate, more specifically a day of skiing and snowboarding during blue skies on fresh, newly delivered snow.

Example: “We’ve picked the best week – bluebirds all round”.

An affectionate term for our fellow shredders (see description for shred, below) and anyone who shares those unparalleled mountain experiences with us.

Example: “Where we headed today bro?”. 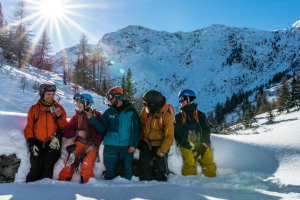 A ski bum is the subject of every resort staff’s envy. They don’t work so have the luxury of skiing all day, every day and joining all the best après gigs and events (see après definition, above).

Example: After a long changeover day: “I am so bumming next season”.

Contrary to what may spring to mind, it actually refers to an epic snowfall that will make every holidaymaker and season workers’ day/week/month.

Psst: This is typically succeeded by high pitched shrieks or multiple high fives. 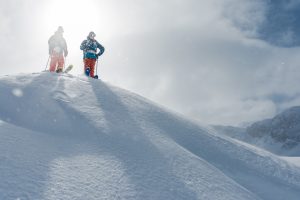 To which very little compares in the ski and snowboarding world. Basically means being the first to ride down a powder field; literally leaving first tracks. It is also the name of our early bird ski touring clinics. Visiting La Plagne? Then have a look at our First Tracks sessions.

Example: The caption “first tracks” under an instagram post boasting of your awesome lines (see definition of line, below).

Basically means off piste, hinting at that freedom one feels when floating through untouched fresh powder (see definition of powder/pow below). Tree runs, extensive powder fields and back country is what it’s all about.

Example: “I’m gonna join a freeride lesson to work on my powder turns”.

Originally coined by snowboarders from the 60s, the pioneers of this discipline saw skiing as ‘rigid’ and subsequently threw the rules out the window so they could ride on their own terms. Now used in both skiing and snowboarding, it refers to the art of performing tricks and creatively experimenting with your skis/board.

Example: “I’m alright on the piste but really need to work on my freestyle skills”.

What about a private lesson to work on your tricks?

As cool/extreme/awesome/dangerous as things get on the hill and used in a variety of contexts which could be confusing to the untrained ear.

Also the title of the film G.N.A.R, which is dedicated Shane McConkey, a brilliant skier who lost his life doing what he loves. 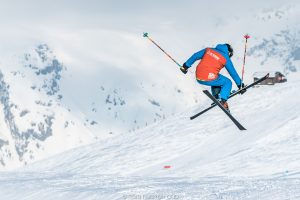 Term used to describe jumps and tricks – basically messing around. Can be used as an adjective, verb, or noun.

Example 1: “That run is so jibby” (playful).
Example 2: “Had an awesome little jib session today”.

Term used for jumps in a snow park. These are usually labelled in accordance with the piste markers ranging from green (smaller ones for beginners) to black (larger gapped ones for more advances freestyle rides).

The lift operators who stand by the lifts in rain or shine helping novices on and off the chairlifts and making sure that day by day we are able to get to our favourite peaks and slide down in safety. They are also the first point of contact in case of emergency.

Example: “If you’re struggling with chairlifts, just give the lifties a shout and they’ll give you a hand”.

Your route of descent, usually used when freeriding (see definition of freeride above). Skiers and boarders alike take huge pleasure in planning their line. This is particularly important in relation to staying safe during a backcountry descent, which, without proper planning or picking your line puts skiers more at risk to huge crevices and fatally dangerous terrain.

Example: “What line you taking?” OR “Check out my line”.

Those guys in oversized pants and hoodies relentlessly lapping the park throwing impressive (or not so impressive) tricks off various features.

Refers to fresh untouched snow. To most skiers and boarders, this is what it’s all about. When it’s a powder day no hangover matters, you will be getting first lifts not matter how much your head hurts.

Example: “Right, alarm set. Tomorrow’s meant to be a powder day so we’re getting first lifts”.

Love the powpow? Have a look at our Steep & Deep Off-piste sessions. 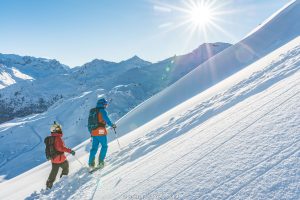 That person who seeks out the best powder runs and is forever hunting new, untouched snow whatever the conditions.

Example: “If you wanna find the best off-piste, speak to Pete, he’s such a powder hound”.

Slang term for anything extremely positive. And is, in some friendship groups, completely overused.

Want a rad jacket? Check out our ski outfits to rent.

To ride. Usually has the connotation of dynamically, or even aggressively.

Example: “Let’s go shred the hell out of that run”.

That awesome feeling, comparable to a rimless shot in basketball, when you smoothly land a jump.

Example: “Did you see that? Proper stomped the landing off that black”.

Style with easy = steeze. This refers to anyone who – without any apparent effort – is just, cool.

Example: “Dunno how he does it but he make everything he does on a board look so steezy”.

To perform something impressive in a competition OR while riding with a group of friends.

Example: Before a park session – “you gonna throw down today or what?”.

Synonym for bail (see description above), so falling over; usually in a dramatic fashion.

Example: “he really wiped out on the last run, hope he’s ok”. 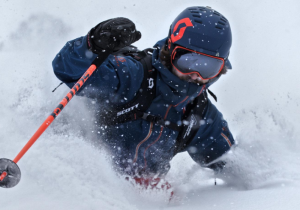 When you ride through the spray of your own epic powder turn. Nothing makes you feel quite so smug.

Example: “Spent some time in the white room today”. (And no, it doesn’t refer to a hospital room. Quite the opposite.)

DON’T KNOW YOUR PISTE FROM YOUR POWDER? ALWAYS MAKING MOUNTAINS OUT OF MOGULS?