DREAMING OF A WHITE CHRISTMAS?

Snow fall is on the way but will it be enough to keep the skiers happy?

Some drops of rain, a ladle of wind, 99% humidity in the air and an energetic snow dance. Put this mix in the fridge for a month or two and serve chilled with a ball of snow and a sprinkling of powder. Will our winter be saved before it has even begun?

The first big snowfall this winter due this week 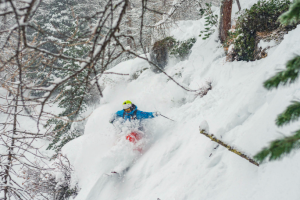 Someone must have been working on their snowdance this winter (we suspect our Oxygene bear) and we never give him any credit. Maybe we should. This week is going to be a snowy one. Cold, damp and windy too, the perfect recipe to cover the summits of our ski resorts in a pretty, white coating and to form a solid base for the rest of the winter’s snowfall. We’re expecting up to a metre of fresh snow in the northern Alps, which once compacted will look like 50cms of snow on the slopes, a good base for this winter. And thanks to falling temperatures the snow cannons will be able to work alongside Mother Nature to add to the snow falling from the sky.

Despite the forecast there are a fair few snow sceptics out there. Given the snowfall data in recent years it is fair to ask whether there will be enough snow this Christmas. Here’s a quick answer to the snow problems experienced by some resorts…

In recent years early season snowfall has been arriving later and later. The slopes in low altitude resorts look like white streaks running through green and brown terrain. How will the resorts ensure there is enough snow? What will you do if you have booked your trip and there really isn’t enough snow?

The resorts (justifiably) dread a lack of snow and have invested enormously in snow-making facilities which have been installed in great numbers across the Alps.

Snow-making is often criticised for its use of valuable water and its environmental impact. But since 2005 adding chemicals to water for snow-making purposes has been banned and the water used actually re-enters the water cycle: 95% melts straight back into the ground and rivers and the other 5% evaporates into the air.

“Nothing is lost, nothing is created, everything is transformed”. All ski resorts are equipped with snow cannons and are now investing in new more efficient equipment, increasing the capacity of their water reservoirs and improving their snow management throughout the season. But how can you plan your holiday, particularly at Christmas on these grounds?

Choose a resort with a Snow Guarantee

If there has ever been a place where you can rely on snowy slopes it is in the 3 Valleys. This famous ski area is offering a “Snow Guarantee”: a refund of your lift pass if there is not enough snow. The ski area’s high altitude combined with their capacity to snow-make guarantees that at least 50% of the domain (some 300kms of pistes) will be skiable. 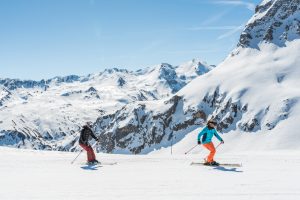 In the Savoie region, the altitude and the cooler temperatures are giving a little more hope than elsewhere in France. The high mountain resorts with their glaciers and mountain lakes ready to supply the snow machines with water are mounting a successful campaign against global warming. Val Thorens is the highest ski resort in Europe. Perched at 2,280m altitude, it’s highest summit reaches 3,230m and offer a magnificent view over the Alps and surrounding mountains. It’s rival resorts include Val d’Isere and Courchevel at 1850m, Meribel Mottaret at 1750, La Plagne which sits between 1,800 and 2,100 and Tignes at 2,000.

So, are you seduced by the sound of a ski holiday where snow is guaranteed and where the weather is nice enough to eat lunch on the terrace of a mountain restaurant? Where you can let your children play in the snow without worrying about them feeling ill the next day? These are just some of the advantages of a ski trip nowadays.