Is this the end of snowboarding?

“It’s a dead argument, objectively skiing is better than snowboarding now, maybe 5 – 7 years ago it was the other way around but all the kids are skiing these days”

As a keen snowboarder, I attended the first day of the Frostgun Invitational competition looking forward to watching the professionals perform tricks that defy gravity, physics and natural self preservation off a kicker the size of which was, at best, harrowing.

What transpired however, was very unexpected. The snowboard competitors seemed to struggle with a kicker that threw them upwards rather than forwards with them frequently landing on the transition between kicker and landing or “knuckling”. More curiously, competitors for the ski competition scheduled to take place on the Thursday were permitted to practice during the snowboarding competition under the guise of providing further entertainment for the crowd. It quickly became obvious that the skiiers were far more comfortable with the gigantic obstacle in front of them, throwing down an impressive array of spins and grabs with ease whilst the first snowboard competitor nearly decapitated the competition MC after seriously misjudging the takeoff on his first run.

The Frostgun competition was, as described, a Platinum Freeskiing Competition with snowboarding seemingly thrown in as a way of prolonging the competition over three days. Is this the future? Is snowboarding now relegated to being a sideshow to the now dominant skiing spectacle? Let us not forget that sportwear giant Nike have quietly withdrawn from the industry despite providing quality boots and outerwear. When shareholders demand profits, sticking with an industry that is in decline appeases nobody. 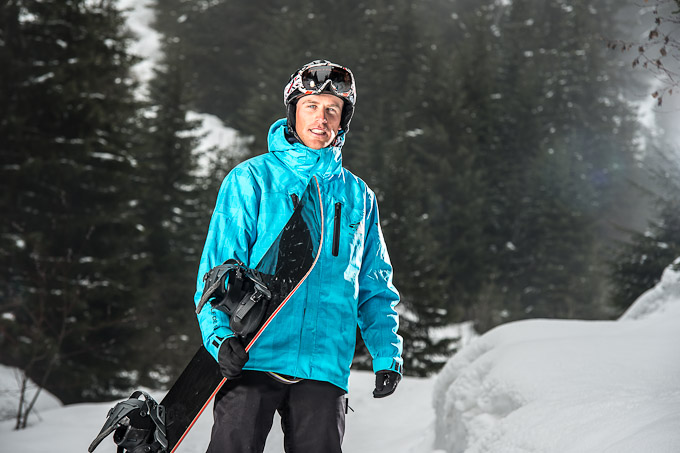 Across North America, statistics show that the numbers of snowboarders visiting the resorts have steadily declined, with many having switched to skiing, and many having just plain stopped after deciding that really they can’t take a park rail to the gut anymore and real life (you know that thing we all fear that involves things like, wife/husband, kids, mortgage) takes over. At the meeting point in Val d’Isère I am frequently asked about the increasingly biased ratio of skiers to snowboarders.

The snowboard industry certainly hasn’t helped itself, when I started snowboarding it was an inclusive community built around pushing the boundaries of off piste terrain and park riding. Now it seems that as I approach 30 the sport no longer wants me, I am older than the majority of snowboarders, the feeling is that I have nothing to offer the sport. Pro-riders are getting increasingly younger and at snow shows the brand reps seem to be a past generation of trendsetters seemingly desperate not to lose touch with the up and coming generation that are more concerned with appearances than the community values that first attracted the initial pioneers of the sport.

In the beginning, snowboarding was the new and exciting alternative to skiing, offering a comparably easy way of accessing off piste terrain and the snowboard itself offered a very pleasant sensation when used in fresh powder. Comparisons with surfing were made and what followed was a revolution in the ski industry. There was an alternative, and it was awesome! Then ski manufacturers realised that they could also make skis with twin tips for the park, wider underfoot skis for better float in powder conditions and skiers could also throw themselves off cliffs with no regard for their personal safety. Undeniably, skiing is a lot more versatile than snowboarding and can access a greater range of terrain now that the equipment has caught up with the demands of up and coming skiers.

It is skiiers now who are more inclusive, who are welcoming newcomers and wayward brethren back to the fold, whilst snowboarders talk about being “core” and lament the influence of “big-corporate” on the industry, whilst ignoring that finding a proper carving snowboard in this day and age is a task left only for the committed. Innovation in the industry since Reverse Camber is hard to find and the apparent narrow minded marketing has slowly removed a lot of the different aspects of snowboarding that initially made it appealing.

So is snowboarding dying? The figures would suggest so, but ultimately it will not die. Most of our instructors are dual discipline even if they aren’t qualified to teach both. The lure of a powder turn on a snowboard is still strong and those of us still on snowboards are still having fun. Ultimately, if people are still having fun and some want to become qualified in order to teach others and share their love of the sport then snowboarding will never die. There’s more than enough mountain for skiers and snowboarders anyway.