In memory of Adrien Sergent

Friday 6th March was the evening of the torchlight decent in memory of Oxygene Instructor and good friend Adrien Sergent whom we sadly lost earlier this season when he was caught in an avalanche on the North Face of the Bellecote Glacier.

The evening seemed charmed from the beginning and went off without a hitch as more than 400 people showed up to pay their respects and take part in the descent. Adrien had a wonderfully cheerful demeanour and lovable personality, he was a talented skier, snowboarder and taxi skier and this was reflected by the diverse crowd who showed up to remember him.
Skiers, boarders, sit skiers, taxi skiers, pedestrians, adults and children alike all gathered together dressed in their uniforms of every ski school, club and institution on the mountain as well as people from the local bars and restaurants. Beers were drunk to Adrien and friendly conversation flowed all over. 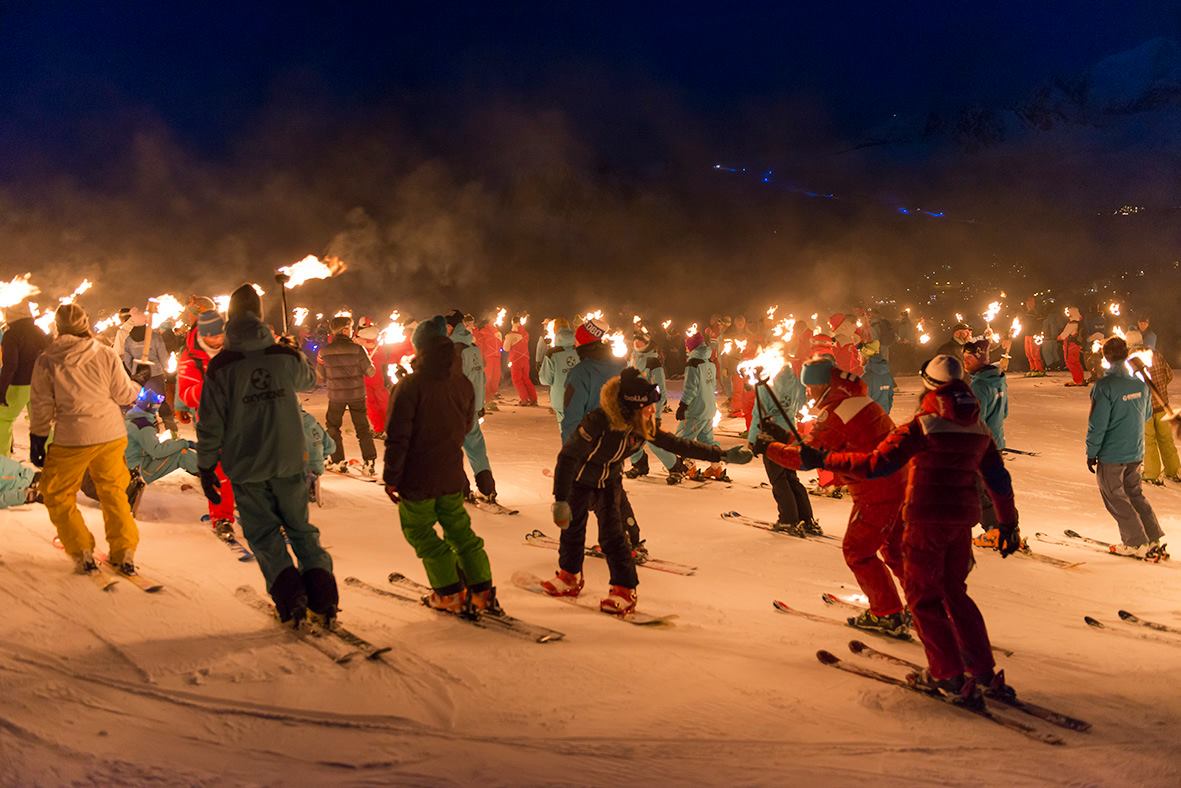 The night was pleasant and warm as the large crowd began to head up the Becoin Chairlift and as we disembarked we were stunned by the view from the top of the Stade. An incredible deep red sunset lit up one edge of the sky whilst the lights of Plagne Centre sparkled in the darkness on the other. 400 people gathered at the top of the Stade taking in the beautiful sight and as the floodlights switched off and our torches began to flicker alight one by one the atmosphere became solemn and charged with emotion.

We took our places for the descent, the children heading off first with their flickering electric torches followed by the rest of us with our torches aflame and held high as we snaked down the hill in a wonderfully long formation that stretched the length of the stade and more. As we reached the base of the run we were seamlessly ushered into our places in the heart shape where we stood as more and more people descended and funnelled in around us. 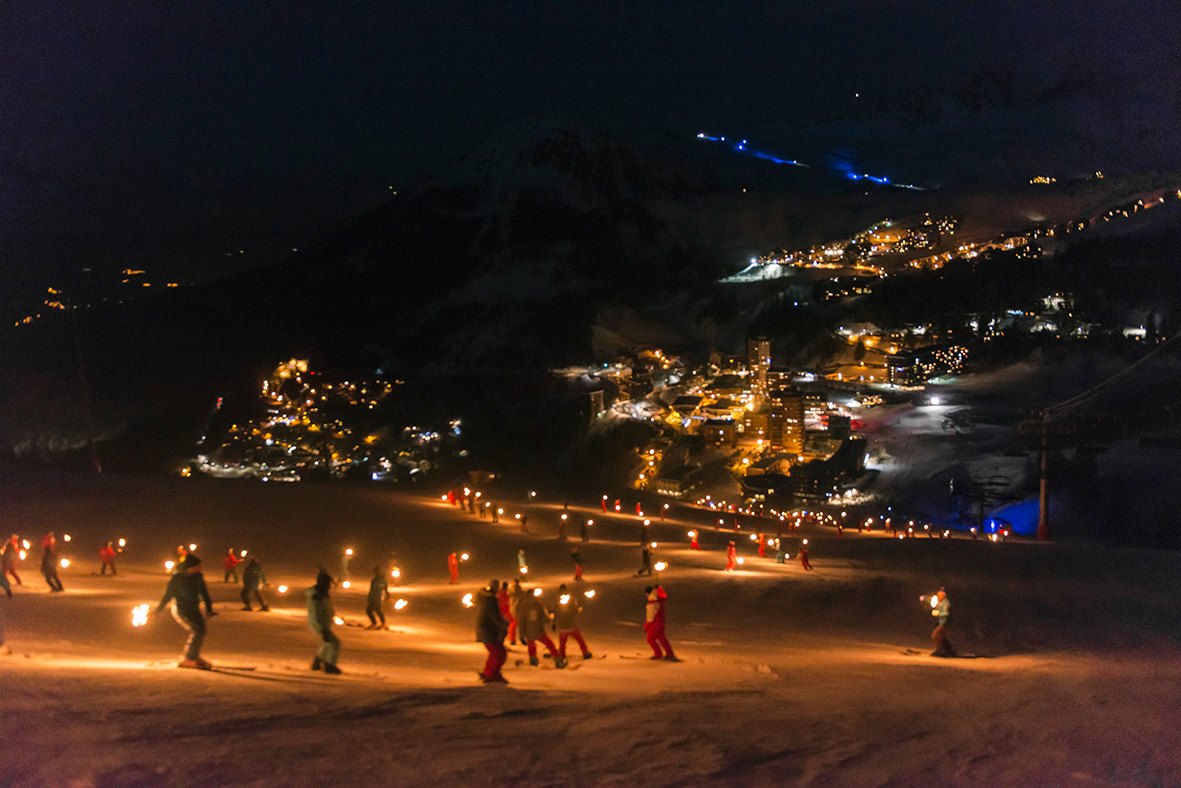 As we stood in silence the timeless Halleluiah by Jeff Buckley was played followed by the equally beautiful ‘Je vole’ by Louane. While the local children sang along to the song, photos of Adrien scrolled on a big screen. The music combined with the crowds silence was more emotive than any eulogy could have been and I don’t believe there was a person there who did not feel the full weight of the moment.

Adrien was too young to be taken away from his friends and family, he was one of life’s cheerful people and will be sorely missed by everyone who knew him, and although nothing can change that fact, the torchlight decent was a beautiful and heartfelt memorial to him. I’m sure I’m not the only person to come away from the evening feeling that for someone to be remembered in such a special way and by so many people is no small thing, and is something which his family and friends can be proud of. 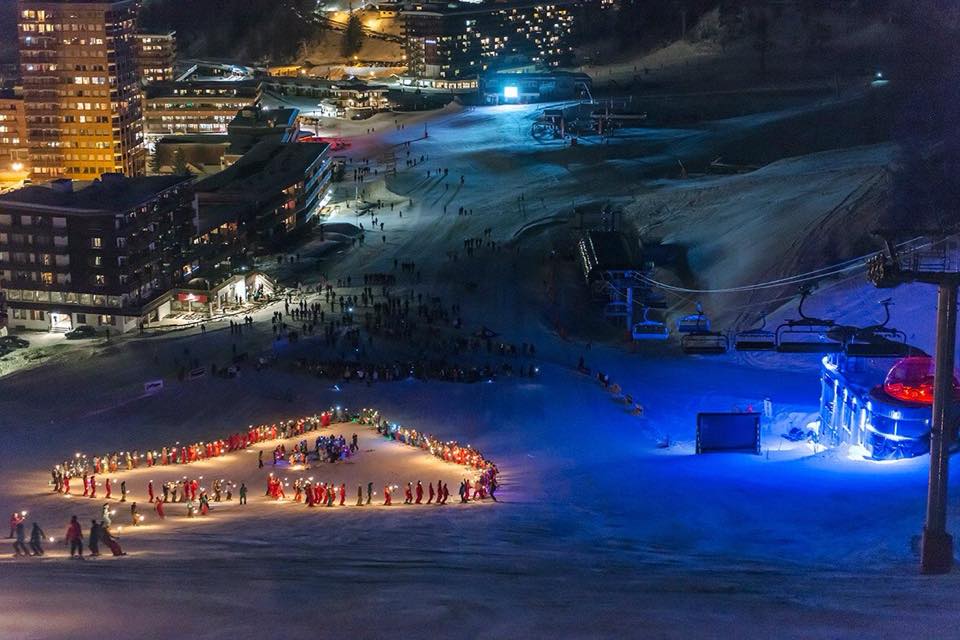 Well done to the people who organised such a stunning event including the people at the Croq’ Neige who kept the drinks flowing late into the night, and thank you to everyone who came along and took part.

Adri, You will be missed.