UNDERSTANDING THE DIFFERENCES BETWEEN OXYGENE, THE ESF, THE ESI AND OTHER FRENCH SKI SCHOOLS

by Alison on August 21, 2018 in Alpine Culture, Useful information

Not all ski schools are born equal but do you know the differences between them? Knowing the difference between Oxygene, the ESF, the ESI and other French ski schools will stand you in good stead when it comes to choosing and booking lessons for your next ski or snowboarding holiday in France.

The ESF is the largest and most ubiquitous ski school in France. You will be hard pressed to visit a French ski resort without seeing any of their instructors, invariably dressed in red from head to toe, with a trail of children behind them. The ESF was created by ski champion Emile Allais in the mid 1940s who was keen for French ski instructors to adopt his French ski teaching style rather than the already-established Austrian method. These days the ESF is present in 250 resorts in France from the Alps and the Pyrenees to Corsica. Despite their use of French national symbols like the red, white and blue of the tricolor flag and the adjective ‘francais’ they are not the official ski school in France, simply a ski school in France (although you would be forgiven for thinking they were some sort of government affiliated entity with a count of 17,000 instructors working for them in 2016). In fact all of the ski schools in France are completely independent from the state, the ESF included.

The ESI was founded in 1977 by a group of instructors from the ESF who wanted to develop a new ski school to target the growing international market. The first of these schools opened in the resorts of Flaine, Val d’Isere and Avoriaz. In 2015 they had 95 ski schools across France, Switzerland and Italy and had approximately 1,800 instructors. Their teaching style is similar to that of the ESF but they were amongst the first to include instructors of different nationalities in its ranks.

Ten years later, in 1987, another new independent ski school arrived on the scene. Evolution 2 sought to develop the idea of ski school into a business that would provide a full range of adventure activities including paragliding and rafting. They are still going today and have around 300 instructors to their name.

A little later to the game a few other, more international, players started to set themselves up in the French Alps, one of which was New Generation who opened in Courchevel 1650 in 1998 and have since popped up in 16 other resorts across France, Switzerland and Austria. With a friendly ethos and a more British style of teaching they successfully established their appeal to the UK market.
Understand the differences between the ESF, the ESI, Oxygene and other French Ski Schools Click To Tweet

Oxygene’s story begins in 1992 when brothers Bertrand and Pierre de Monvallier (both ESF instructors at the time) had a vision for a new type of ski school that would promote the joy of learning to ski – the idea being that if their students were more relaxed and were enjoying themselves whilst learning that they would more easily and quickly improve their technique on the snow. This would result in them enjoying their holidays more. They began in La Plagne and five years later opened a second school in Val d’Isere and invited a third brother, Julien, to join the business. At almost the exact same moment back in 1992 Lulu Cottle and Eric Guironnet were establishing Magic in Motion ski school in the 3 Valleys ski area for very similar reasons. This fact became important to Oxygene in 2016 when Oxygene and Magic joined forces under the name Oxygene, more than doubling their presence across the Tarentaise Valley. And Oxygene haven’t stopped there adding a new school in Megeve to their portfolio for winter 2018-19. In 2018 Oxygene is present in 9 resorts in France and has an instructor count of around 250.

Oxygene has expanded beyond the original ski school mould turning the ski school experience into a full holiday experience to enhance customer experience and satisfaction. Now, a number of non-skier activities have been added to the programme, there are ski rental shops in both La Plagne and Val d’Isere that also provide a ski equipment chalet fitting and delivery service and from 2018 you will be able to rent high quality ski clothing across all resorts. 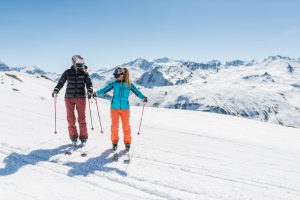 EACH TO HIS/HER OWN…

The opening of various competing ski schools across France in the 1980s and 1990s has allowed each school to develop its own character and produce their own lesson programme adapted to an ever-evolving clientele. You wouldn’t be wrong to say that each school offers a similar end product i.e. ski and snowboard lessons in group and private formats. All French instructors also have the same (very high) qualification regardless of the school they work for. Whilst this is true there are some visible differences between the schools which include the price of the lessons, the colour of the uniforms and the names of the level badges awarded to children but the more important differences are those which are a bit harder to spot. These are the values and principles upon which each school is built, the way in which your instructor passes on their passion for skiing and the mountains, their teaching methods and styles and the relationship they build with you, their student. 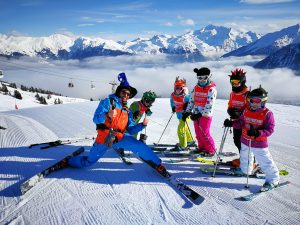 An Oxygene ski instructor with his group of students

Oxygene sets itself apart from many other schools offering limited group sizes across all group ski and snowboard lessons for a more personalised experience. The suite of lessons available to children has been renamed the Magic Fun Factory and are truly designed with children in mind to give them the best possible introduction to skiing. Oxygene also believes that skiing should be accessible to everyone regardless of their mental or physical capacity and it is for this reason that Oxygene has become a market leader in the adaptive skiing arena, both for its investment in modern adaptive ski equipment and its adaptive ski instructor training programme. Oxygene also takes care of its instructors and future instructors through its ski academy, designed to prepare instructors-in-training for their exams and Eurotest (a giant slalom test where they have to achieve a result within 10% of the time of a top level competitor). 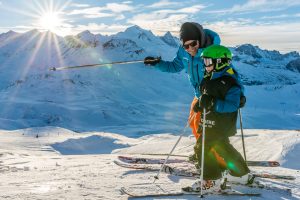 Oxygene ski instructor with a student

We hope this article has helped you understand a little more about the history and the nature of the various ski schools in France. Now you have the information you should be able to make your choice and book your lessons.